New perspectives on animals as bearers of meaning

The world of literature is full of animals, but their representation though history also says something about how we humans regard ourselves and our power over nature. Literary scholars have now come together in a research group entirely dedicated to the study of animals in literature. 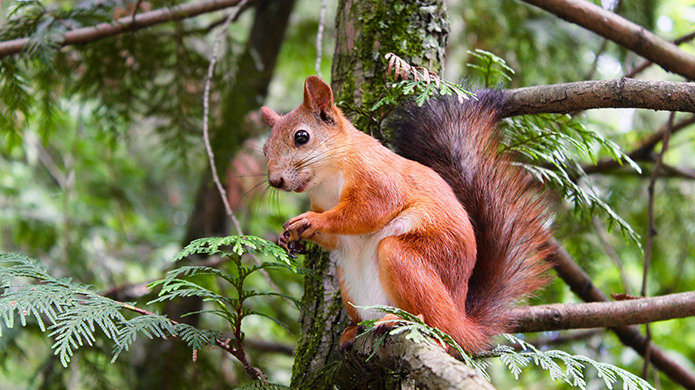 In Norse sagas and mythology, Ratatǫskr the squirrel ran up and down the trunk of the world tree, Yggdrasil, as a messenger between the eagle in its crown and the dragon in its roots. This squirrel has now lent its name to an entirely new research group, the Ratatǫskr Research Group for Literary Animal Studies, where the members have a particular interest in the relationships between humans and animals in literature, relationships that stretch far beyond the pages and spines of books.

– People and the human perspective are the automatic focus of comparative literature, just as in the humanities in general. But if you start to question this, seeing literary representations of animals as animals, rather than as representations of human feelings or concerns, it reveals the power relationship between humans and nature. This also intersects with the discussions about the ongoing climate crisis, which can ultimately be blamed on humanity focusing on its own needs ahead of those of animals and nature, says Ann-Sofie Lönngren, associate professor in comparative literature.

Literary animal studies, which encompasses the study of the relationship between humans, animals and literature, is part of the wider field of human-animal studies which, in turn, is part of a post-humanist field. As a field, literary animal studies is primarily found in the Anglo-Saxon academic world and is still relatively uncommon at Swedish higher education institutions. However, several subjects at Södertörn University have researchers examining the relationship between humans and animals.

– As far as I’m aware know, we’re the first Swedish research group in literary studies to have this specialisation, but there are some interdisciplinary networks at other institutions and universities. A number of us in the research group also have close contacts with the international field of literary animal studies, she says.

Ann-Sofie Lönngren believes that we can learn from our prejudices by changing focus and placing animals, rather than humans, at the heart of scholarly analysis. The important element is the power relationship between humans and animals, which should also be seen in relation to other orders of power, such as those of gender or ethnicity. But she also points out that, ultimately, it is about ethics, about how we humans treat animals and nature.

Several of the researchers in comparative literature at Södertörn University have previously had animals in literature as a special area of interest. For example, Ann-Sofie Lönngren has studied how animals are represented in the major classics of Nordic literature and also researched people who are transformed into animals. However, subjects vary widely and can be anything from agricultural animals to bears.

Why did you take your name from a little squirrel?

– We wanted something that also captured international attention. People know about Norse mythology and we are in a Nordic country, but Ratatǫskr being both a mythological animal and a representation of a real species fits our specialisation. Ratatǫskr is also a messenger, a carrier of information, knowledge, she says.