School pupils in the majority at climate strikes

Greta Thunberg’s school strike outside the Swedish Riksdag initiated what is now a global climate campaign among school pupils – but who is participating in these strikes? Researchers in nine European countries have investigated and presented the results in a new report, showing that more than one in three school pupils who participated in the Global Strike for Future in Stockholm had never previously taken part in a demonstration. 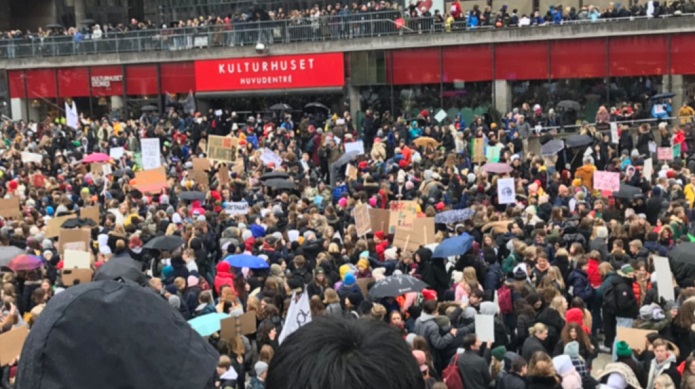 The Global Strike for Future was held on 15 March 2019. It appears to have been the biggest-ever globally coordinated youth action, with protests in almost 2000 towns and cities in about 100 countries.

To investigate who is participating in these protests and their beliefs about the issue of climate change, researchers in nine European countries conducted a coordinated survey of people who participated in the climate protests on 15 March. In Sweden, surveys were performed in Stockholm and Malmö. Outside Sweden, surveys were conducted countries including Germany, Belgium, Italy, Switzerland, Poland, Austria and the UK. Magnus Wennerhag, professor of sociology at Södertörn University, is one of the researchers behind the report.

“The climate is one of the decisive issues of our time, but has not previously led to such extensive and continual protest actions, apart from some mass demonstrations associated with the UN climate change summits,” says Magnus Wennerhag. “It’s therefore interesting to see that Greta Thunberg’s climate strike has such a global reach, and that many young people have become involved in this issue.

“The climate strike has been widely covered in other European countries, so we wanted to investigate this new type of activism during demonstrations happening on the same day, to discover which groups are most likely to be demonstrating, their previous political experience and the way they want to deal with climate change,” he continues.

Some preliminary results from the questionnaire

(link in Swedish) used in Stockholm have now been presented and compared with the results from Malmö and other European countries.

Women in the majority among participants

The results show that pupils at compulsory and upper-secondary school are the biggest group of demonstrators in the climate strikes, but that many adults are also participating. The majority of protesters are women.

“That the school strikes are so associated with Greta Thunberg is almost certainly a reason why they mobilise so many women, and so many young women. We should not underestimate the importance of role models that people can identify with among people who become politically active,” says Magnus.

Genuine commitment behind the protests

More than one in three of the school pupils who participated in the Global Strike for Future in Stockholm had never previously taken part in a demonstration.

“This shows that these new protests are reaching out to young people who have never before been politically active, which is interesting. It also appears that the strikes are really based upon a genuine commitment, because participants are also making individual efforts to reduce environmental problems – for example by eating differently or consuming less,” states Magnus Wennerhag.

The report includes data about the level of education, membership of organisations, information channels, political views and the protesters’ opinions about how climate change should be stopped.

“This survey should be regarded as a pilot project, one we conducted without any external funding. If you study political protests you must be prepared to work with short notice, when a political issue suddenly comes into focus and many people take action. Naturally, we want to continue studying this new form of youth action, to see how it develops over time. Will the climate strikes be replaced by other forms of climate action, and to what extent will people who have never previously protested continue to do so?”

This article was updated on 23 April 2019. Nine countries participated in the survey, not ten as previously stated.