Why do forests boost our wellbeing?

Research has recently shown that spending time in forests improves people’s wellbeing. The concepts of forest bathing and forest therapy originated in Japan and have spread globally, and involve being in a forest, absorbing its atmosphere and allowing it to flood your senses. Measurable benefits include reduced stress and lower blood pressure – but why does being in a forest make us feel better? Henrik Ohlsson, religious studies scholar, wants to know more. 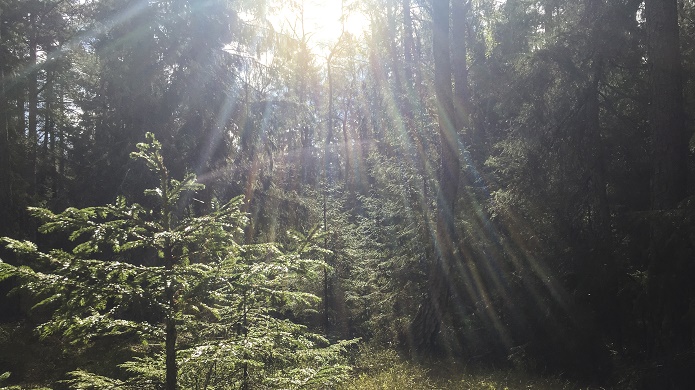 “My starting point is the human sciences – I want to understand what it is that we experience in the forest and how it affects us,” says Henrik Ohlsson. “Psychological and biomedical research into nature and health have shown strong statistical links between the two, and I want to contribute to an improved understanding of these links. This is a dimension of our wellbeing that is closely connected to how we create meaning and identity, which – for some people – is expressed in religious or spiritual terms.

Henrik Ohlsson studied the history of religions at Stockholm University, specialising in Central Asia, but he has always had a great interest in the natural world and is now writing his thesis on existential health and contact with nature. His thesis is part of a larger research project, led by David Thurfjell, examining secularity and relationships to nature in the countries around the Baltic Sea. This project also involves researchers in Denmark and Estonia. 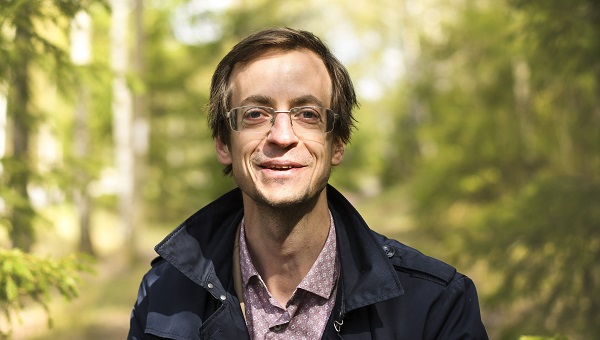 Many people feel a longing for forests and nature

“When I applied for my doctoral studentship I hadn’t clearly formulated the health perspective, instead it was more about general relationships to the natural world,” says Henrik. “This could perhaps be expressed more in terms of cultural or existential ecosystem services. Ecosystem services are the things provided by a functioning ecosystem, such as water purification, berries, mushrooms and timber. But there are also societal ecosystem services, such as opportunities for recreation. I wanted to investigate an additional level – or perhaps an aspect – of societal ecosystem services, and health is something that is very present when I talk to people about their experiences of nature. The issue is what we actually mean by health – is it simply that the body is functioning optimally?”

Henrik’s research consists of both in-depth interviews and participatory observations; he joins in organised forest bathing, or shinrin-yoku, sessions, and has also taken part in foot pilgrimages arranged by the Church of Sweden.

“Most people I meet in this context are aged between forty and fifty. Perhaps it’s sometimes a bit of an age issue, maybe a midlife crisis,” reflects Henrik. “It can include people who have suffered occupational burnout, but can also be those who have a vaguer sense of sadness, that something is lacking, a longing for nature and perhaps for a bigger context. Our urbanised lives are something relatively new and, just a few generations ago, many of us would have been in self-sufficient farming families. Now there is a longing for more contact with the natural world.

Henrik describes forest bathing and forest therapy as activities that are supported by multiple pillars.

“One of these pillars is research, particularly in medicine, psychology and ecology, with one example being research about how trees, fungi and other organisms communicate and interact in an ecologically healthy forest. This has been popularised by Peter Wohlleben in his bestselling book The Hidden Life of Trees. There is an expression for this: wood wide web – a type of underground internet in which there is continual communication. Forest bathers and other people with an interest in nature seem to be increasingly willing to be a part of nature and of this interaction. This appears to be a fairly new trend that breaks with the once dominant view of humanity as solely a problem, one whose influence on nature should be minimised.”

Mindfulness is an important influence

Another important influence is mindfulness.

“In this context its entails being present and having a sensory awareness of what is happening in the forest around you,” says Henrik. Exercises in perception and attention are used to make emotional ties with nature and the organisms found there.”

Forest bathing – good for humans and for trees

Other aspect that Henrik and his colleagues have begun to investigate is how these emotional ties to nature affect choices relating to our lifestyles and ethics. For example, can forest bathing be regarded as a form of ecological activism?

“One idea that runs through forest bathing and forest therapy is that healing is a reciprocal process; that you can be healed by forging links with nature, but also that you give something back. Partly just by being present and emotionally involved, but also because a person who makes such connections will probably want to live in a way that is more in balance with nature.”