Sunshine, summer, holidays – and ticks. Just like wasps, ticks are the sand in the ice-cream cone of summer – but there are ways of avoiding bringing them home and being infected by tick-borne diseases. 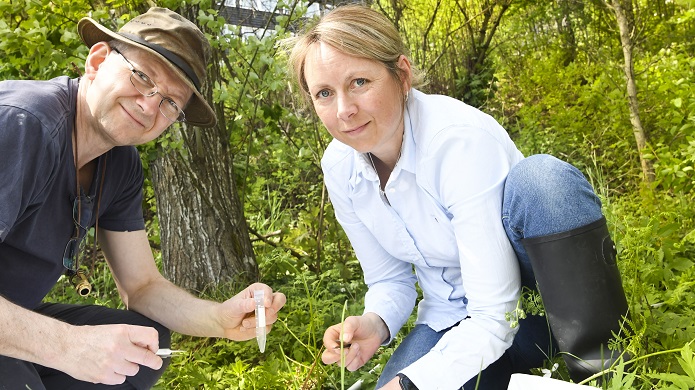 Patrik Dinnétz, senior lecturer in biology, and Thérese Janzén, doctoral student in environmental science, are studying ticks and tick-borne diseases. Thérese’s thesis is part of a research project at Södertörn University that focuses on ticks in urban green areas. Its purpose is to study where ticks thrive and where they don’t, and how you can avoid being infected by tick-borne diseases.

“Ticks are rewarding to work with,” says Patrik. “They are easy to catch and study. They also cause problems for humans and many people have strong feelings about them, but not positive ones.”

Thérese has a personal reason for choosing to study this unpopular little organism:

“When I was young we had a holiday home in the Stockholm archipelago, where there were so many ticks! People close to me have suffered from both Lyme disease and TBE [tick borne encephalitis]. My dissertation for my Master’s in Infectious Disease Control at Södertörn University was about the risk of equine anaplasmosis – Anaplasma is a bacterium that is spread by ticks and which can also infect humans. After that, I realised I wanted to continue by researching and working on diseases that are transferred by ticks. I wanted to discover more about the environments in which the risk of being infected by tick-borne disease is greatest and perhaps help others not to be affected by diseases like TBE,” she says.

Patrik and Thérese bring out a white sheet, test tube, a mop and some rubber gloves – we’re going on a tick hunt! While we’re on our excursion they share their expertise on the pest we hope not to see this summer – and tell me five fascinating facts: