As long as national strategies and policy documents prioritise economic growth rather than sustainability, we will not achieve the objective of a sustainable society, according to Mathilde Rehnlund, who is about to receive her doctorate in Environmental Science from Södertörn University. 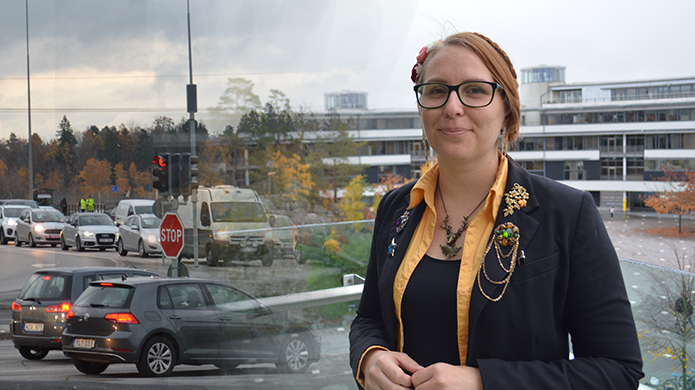 Stockholm is marketed as one of the world’s cleanest and most climate-smart cities. Meanwhile, transport volumes are increasing, the city is growing and there are more cars on the streets. So how does this fit together?

Many decisions about Stockholm’s traffic situation were made between 2007 and 2017 and were made on the basis of policies, i.e. the guidelines and statements of intent that shape the transport network. Policies which, according to a new doctoral thesis from Södertörn University, are characterised by a faith in technology and prioritise economic growth, rather than sustainability and a good environment.

“If you have a number of equally important concepts, of which one is easy to measure, of course you’ll focus on that. Also, when growth is turned into a means for everything else, it will always have top priority. We need to move away from economic growth as a form of panacea,” says Mathilde Rehnlund, doctoral student in Environmental Science.

How are policies constructed?

In her thesis, Getting the transport right – for what, she examines how sustainability is constructed in policies and what the presented measures and proposals say about the problem. Her studies are conducted from a poststructuralist perspective, in which what is said and the proposed measures are assumed to carry or create meaning – a meaning that is not natural or obvious, but which should be studied as politically loaded.

She has used Carol Bacchi’s framework for “what’s the problem represented to be”. Other research that examines transport often does so from a technical perspective, although there are few things that have as much impact on people’s surroundings as roads, cars and public transport. This is far from simply being an engineering issue, but social aspects are often lacking when policy is developed. People are reduced to beings that work and commute.

“One thing that practically vanishes in policy documents is our social needs. The meaning of life, if you look at what policies enable, is travelling to work. Then you work for eight hours and travel home again. There is very little time left for social and political activity. So, as an individual, if you commute to work, what you are is a commuter,” she says.

Mathilde Rehnlund’s studies show that work for sustainability in the City of Stockholm in the period she examined was characterised by a great faith in new technology, while time as climate crisis is said to be due to poor technology. The issue of sustainability largely focuses on transport emissions, which should be managed through consumers’ personal choices.

“Policies say that we should reduce the amount we travel, but very little is done in practice. Quite the opposite, it’s said that Stockholm should be an expansive work region. In practice, this means that people should travel more. That’s an aim. And however we travel, it requires power. Even if the metro does not emit carbon dioxide, it takes power and carbon dioxide to produces trains and underground networks. This also has a significant impact on the landscape. I’d say that public transport has been entirely de-problematised, no one talks at all about its negative effects,” she says.

The city is regarded as the most sustainable option

The documents Mathilde Rehnlund has studied also make it clear that it is the city that is sustainable. This is where people can be provided with efficient systems, not only for transport, but also waste management and other public services.

“This also results in some preconceptions about what a good and efficient system is. That you always have to commute long distances and that people who live in rural areas cannot access a local community with local production. All these assumptions are the basis of the city being most sustainable,” says Mathilde Rehnlund.