Forty years have passed since the strikes in Poland that gave rise to the Solidarity trade union. Their legacy and the memories of the popular movement remain, although its history has become a pawn in a political game. 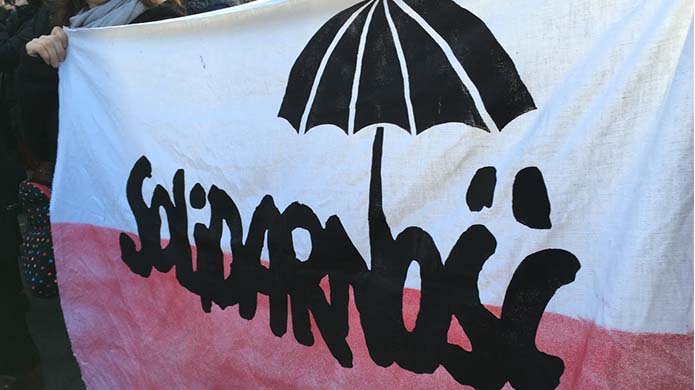 Protester holding a Solidarity flag during a demonstration in 2016. Photo: Agnieszka Graff

In the summer of 1980, workers staged a sit-in at the Lenin Shipyard in the Polish port city of Gdansk. What began as a protest action for better working conditions ended as a nationwide movement, with its leader, Lech Wałęsa, being elected president about ten years later.

The Solidarity trade union was formed in August 1980 and came to have great significance for Poland’s citizens and its democratic development. The agreement drawn up between the leaders of the movement and the Polish Communist Party is a defining event in the country’s history.

“The movement was important for many reasons, but partly because it was a movement that was run by the workers, the people who were the backbone of the communist societal system. It brought them special legitimacy because these were the people who ‘should’ support the Communist Party. It is an important day to remember, because it was the moment that Solidarity became part of Polish history, part of the history of the fall of the Iron Curtain and the Berlin Wall,” says Elzbieta Korolczuk, associate professor of history at the Institute of Contemporary History, Södertörn University.

The legacy lives on

Despite forty years having passed, the memory of the movement lives on. Aleksandra Reczuch is a doctoral student in Ethnology and studies the links between female parliamentarians and organisations in civil society. She sees how the legacy of Solidarity echoes through several contemporary political movements.

“A few weeks ago, I saw that the Polish section of Extinction Rebellion [the climate change protest movement] had published an image on social media. They had taken an image from a demonstration in 1980 and placed it beside an image from a demonstration they held this year. Today’s popular movements see that they are carrying the legacy of Solidarity onward, a political will that starts with the people. Mobilising the people is a powerful idea, and that is Solidarity’s most important legacy,” she says.

A pawn in a political game

As Poland’s populist right has grown in strength, Solidarity and Lech Wałęsa have increasingly become pawns in the political game for ownership of Poland’s history. There are now several parallel stories about the movement.

“Until very recently, the official story was that of a movement led by Lech Wałęsa. It was a movement supported by Poland’s intellectuals, a movement that succeeded in overturning communist rule, resulting in the first semi-free elections in a Soviet republic. But Solidarity is not just Wałęsa; there were also other prominent leaders, including women. Feminist researchers and activists are picking up on this story to show that women contributed to the transition to democracy. In 2016, women who opposed the ban on abortion used references to Solidarity, because they identified with the union’s fight for freedom,” says Elzbieta Korolczuk.

The current governing party, Law and Justice, took power in 2015. It is described as a party that is both populist and nationalist. Aleksandra Reczuch says that, despite this, they are also trying to link themselves to Solidarity’s legacy, even though it’s from a more nationalist perspective and not so much about Solidarity as a popular movement and trade union. As part of its populism, the party is trying to link to the heritage of anticommunism.

Memory politics is an important tool

The European Solidarity Centre was founded in Gdansk in 2014, and is a research centre, museum and library dedicated to the history of Solidarity and other opposition forces in the former Communist Bloc. When the nationalist Law and Justice came to power in 2015, they tried to take control of the centre. When this didn’t work, they opened another museum, with another purpose.

“For the current government, the politicisation of the country’s history, memory politics, has become an important tool. Their aim is to delegitimise the leaders from the period after 1989, such as Lech Wałęsa, and instead to create new heroes, a new version of Polish history. Lech and Jarosław Kaczynscy are now presented as the leaders of the movement, although they were marginal figures in Solidarity, and efforts have been made to discredit Lech Wałęsa and other political leaders. They accuse Wałęsa of spying for the secret police and the communist parties,” says Elzbieta Korolczuk.

Do people believe the version the government wants to spread?

“Yes, many people believe it, for many reasons. Lech Wałęsa has a strong personality, as a politician he often said controversial things. People question how an ordinary worker could become president without really having any qualifications. The explanation would then be that he was put there by the secret police and the communist party,” says Elzbieta Korolczuk, and continues, “Many people associate Lech Wałęsa with a very difficult period in Polish history. The 1990s brought high unemployment and inflation. In a way, there is a need to hold someone responsible for this and, for some, he has become that someone."

Why is it important to highlight the memory of Solidarity?

“It is important because it shows how we look at our history, as well as our future. Solidarity has left a great legacy behind, and a sense of power that starts from the people. One important lesson is that people can influence power if they work together. It is important to remember this when people feel defenceless when facing societal change. Solidarity started with ordinary people who wanted better lives, they did not have huge ideas – they wanted to be seen as citizens, not people who were owned by a system,” says Elzbieta Korolczuk.