New runestone found by chance: “Definitely the discovery of the year”

A rock that had lain, forgotten for years, on a farm in Småland, has turned out to be a sensational and historic find. A new runestone has been discovered for the first time in a decade, and Veronica Palm, a doctoral student at Södertörn University, is one of the ones lucky enough to study it. 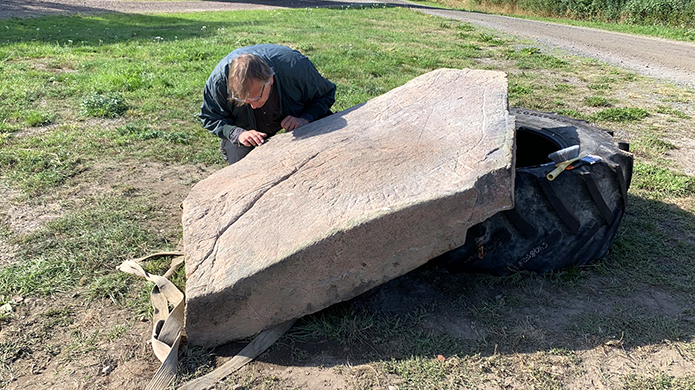 On an autumn day, a few years ago, a farmer at Hellrö farm, in the northeast of Småland, made a sensational discovery – without realising it. While ploughing a field he noticed a large rock, almost two metres long, in the way of the plough. He moved it to the edge of the field, where it lay untouched until this September, when the farmer needed to build a step for an outhouse and remembered the big rock he’d moved out of the way a few years previously. When he went to collect the rock, he noticed that the side that was facing the ground was covered in runes. The farm’s owners contacted Västerviks Museum, which immediately sent staff to investigate the find. One of the first people on site was Veronica Palm, deputy director of Västervik Museum and an externally employed doctoral student in Archaeology at Södertörn University.

“This is an incredible find. It is a good match for this environment, which is a younger iron age setting. A buried cache of silver has previously been found on the farm, proving that this place was not the home of an ordinary family, as they erected stones to their relatives and buried treasure. This site has enormous research potential,” she says. 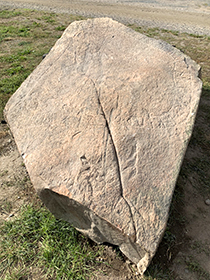 Typical of its time

A runologist also visited the site, to interpret the text on the runestone. It says:

Veronica Palm says that this runestone is fairly typical of its time. The inscription states that a son erected the stone to the memory of his dead father, but the female name Ögärd has not been confirmed anywhere else. The stone also has a runic animal, a snake biting its tail, and a cross that allows the stone to be dated to the period between 1030 and 1050.

“It fits with its time. Christianity arrived around then, and it was important for people in the higher social classes to somehow demonstrate that they were Christians. It was a status marker,” she says.

The first new runestone for a decade

Veronica Palm says that finding new runestones is unusual. The ones now found are often previously known stones that have been discovered and registered, before disappearing and then being rediscovered centuries later. The last time an unknown runestone was found was ten years ago.

“This find is important, for both archaeological research and linguistic research. It’s the discovery of the year, to say the least. It is particularly important for local research and adds an extra dimension to this site, which was apparently of special significance in the local area. This provides additional confirmation of what we suspected about this location,” says Veronica Palm.

Her aim is to conduct a dig at the site where the stone was found. In her licentiate thesis she is writing about the area’s iron age landscape and hopes to include Hellrö in her project.

What will happen to the runestone now?

“We are going to have a meeting with a conservator, as the stone has cracks that must be stabilised. Then we hope to be able to display it at the farm so the public can see it. Our ambition is for it to be accessible and to stand where it belongs.”