Journalists Maria Ressa from the Philippines and Dmitry Muratov from Russia have been awarded the Nobel Peace Prize. “This is a recognition of the work of many courageous journalists," says Walid Al- Saqaf, associate professor of journalism at Södertörn University. 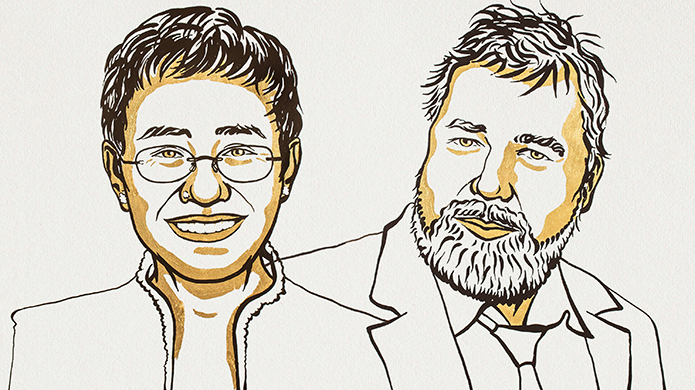 The recipients of the Nobel Peace Prize were announced today. The journalists Maria Ressa and Dmitrij Muratov are awarded the Peace Prize for their courageous fight for freedom of expression in the Philippines and Russia.

The Philippines’ Maria Ressa, 58, is a well-known advocate for the freedom of expression and founded the Rappler media company in 2012. Dimitry Muratov, 60, is editor-in-chief of the independent Russian newspaper Novaja Gazeta, which has resolutely shone light on corruption and threats to human rights in Russia since 1993.

Walid Al-Saqaf is an associate professor of journalism at Södertörn University. He is currently teaching a Master’s course on press freedom.

“I was delighted to hear that the journalists Maria Ressa and Dmitry Muratov had been awarded the Nobel Peace prize," says Walid. “This is a welcome development that recognises the work of many courageous journalists who face serious challenges to press freedom around the world. I had the privilege of interacting with Ressa and worked on social media analysis as part of Rappler’s investigation of the Twitter bots war.

"It is also an inspiration to our own journalism students, including our International Master’s students currently studying the module Press Freedom in a Global Perspective."