"Sometimes, what is bad and what is good comes out clearly” – Andrea Pető on struggle, her research and what motivates her

She is a renowned scholar and a champion of global academic freedom, which has made her the target of far right and illiberal groups. However, Andrea Pető has also been awarded an honorary doctorate by Södertörn University. Here, she talks about what motivates her continued work. 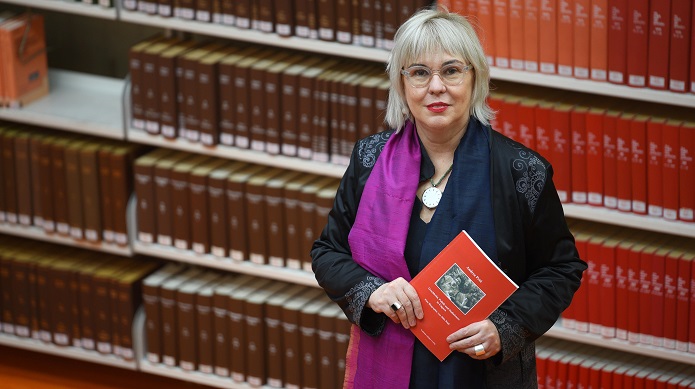 In 2008, Andrea Pető received a very peculiar phone call from the Hungarian Minister of Social Affairs. It was regarding a question from one of the country’s conservative members of parliament concerning her edited supplementary textbook about History of men and Women in Hungary in the 20th century.

“The member of parliament claimed that the supplementary history textbook I edited contributed to a “culture of death”. This was the first time I heard that term which, after a little investigation, turned out to be a term that originated from the Vatican labelling anti-equality movements, and it regards gender studies as an enemy. After that incident, when my textbook was discussed in the Hungarian Parliament, I started to read up and try to discover what was actually happening in these movements. Feminist academics often say that the political is personal, your experiences shape your academic work,” says Andrea Pető.

Since then, these attacks on academic freedom and particularly on gender studies have come to be part of her field of research. As a gender studies scholar, Andrea Pető has laid the subject’s foundation in Hungary and other Central and Eastern European states. Not least, she contributed to one of the first handbooks in the subject, which probably has a place on many researchers’ bookshelves.

Attacks on education and research

That telephone call in 2008 was the start of a struggle for academic freedom that has since become even more urgent. Over the years that have passed, the attacks on gender studies and on her personally have become increasingly virulent. After being asked to withdraw a peer reviewed article published in Germany that criticised the Hungarian Accreditation Committee (the supervisory authority for higher education), she resigned from her position there.

“I saw how the accreditation committee of which I was a member was taken over by illiberalism, and I wrote about it in a peer reviewed scientific article for the Berichte für Wissenschaftsgeschichte journal. The president of the Hungarian accreditation committee demanded that I withdrew the article, which I found unacceptable. The article then became one of the most read in the history of the journal,” says Pető.

In her article, she also criticised the European Quality Assurance in Higher Education, an organisation that works for the quality assurance of European higher education. She believed they were not doing enough to tackle the threats to academic freedom in Hungary and Poland.

Gender studies is a well-established subject internationally, and research and education are conducted at numerous prestigious universities. This includes Pető’s workplace, the Central European University (CEU), originally from Budapest. However, the subject has become a target for illiberal regimes and, as part of the restrictions on critical thinking and questioning of the dominant societal order, the subject was deleted from the accredited study list without explanation in Hungary in 2017. The CEU could no longer conduct activities in the country and the university moved to Austria in 2020.

“I saw it as a personal betrayal, we had to go into political exile. It is heart-breaking when your homeland and government do not want you or your research, pulling the rug out from under everything we have built up for decades. It undermines our work and our legacy. More than three hundred employees: faculty and staff had to move that summer, but we had a very warm reception in Austria, where CEU is now the third-highest ranked university in the country,” she says.

Andrea Pető sees two main threats to academic freedom. One is illiberal regimes that capture and take over institutions that are intended to protect academic work. The institutions become hollow copies, she says.

Another threat is illiberalism’s view of higher education which, according to Pető, means it has adopted a language and practice inspired by neoliberal market ideals. They believe that research policy should be run by financially driven factors, by how the results can benefit society economically, rather than being driven by its own motivating factors such as curiosity, conviction and intuition.

“This neoliberal managerial was the language the illiberal politicians were using when they prohibited gender studies. They said there were not enough applicants, and the researchers did not have enough citations. These are things that can be disproved, which I have done on my social media accounts. Nevertheless, it was an alibi discussion because the government had already decided what they wanted to do. The words of negotiation and dialogue are facade, an alibi. However, as a responsible intellectual, you have to argue against it,” she says.

As a researcher, what motivates you?

“Sometimes, what is bad and what is good comes out is very clear, there are moments when it becomes so obvious. Like a flash in the dark. If you want to live a dignified and meaningful life, there is no other option than living the life you believe is the right one. If I didn’t do what I do, how could I look at myself in the mirror?” asks Pető, and continues, “Everyone has to do their bit, I can teach and write and talk about what is happening. We’re not alone, we have to remember that. We have to remember that feminist solidarity is the fundamental principle. And we have to remember that this battle is a marathon, not a sprint.”

Contemporary society is extremely polarised. How can we avoid becoming caught in the debate?

“Illiberal regimes thrive on polarisation, by deepening the divides between people. I have chosen not to accept invitations to debates with only two participants. I do not want to be forced into a corner where there are only two options: for and against. Life is more complicated than that. I also try to use a different type of language. What we can do is to avoid the ideologically loaded words in debates that are used in Russia, for example, or by the conservative right in the US, to describe gender studies. We can talk about it in meaningful terms, talk about societal differences and their causes instead,” she says.

Wants to get other people to think

Andrea Pető has always been interested in conversations and encounters between people. As a child, she would play post office, instead of other toys and loved it when her father brought home postcards from work. The desire to write books, to convey her ideas using words was what led her onto an academic path. If others were to describe her, she would like them to say that Andrea was a historian who write books that people read and which made them think.

“I write my books and my article because I want to make a difference in the world, not just to make an academic point. I write them because I think it is important. And that’s how I want to be remembered. But I think others would describe me as someone with apparently unlimited energy, who publishes a lot and has strong opinions about everything.”

Andrea Pető believes that we must be prepared to fight for many of the issues surrounding equality, freedoms and rights, which many of us in western European countries take for granted. Looking in a crystal ball, she sees how illiberal forces could, also in Sweden, attempt to undermine women’s right to intellectual work and focus on reproductive issues in healthcare. However, the key is to continue the fight and to accept that there are multiple truths, to listen to the opinion of others no matter that it is difficult.

“Many mistakes have been made in contemporary politics; many conflicts that have not been dealt with in society. It is a difficult time, but I am optimistic because there is so much we, academics can still do to make the world a better place,” says Pető.