Master’s student Johan Kihlert has been awarded a scholarship by the Vaartoe Centre for Sami Research, thanks to his essay in Sami research, an area that was entirely new to him when he started writing.

“It feels amazing. I’ve had my eyes opened to Sami issues,” he says. 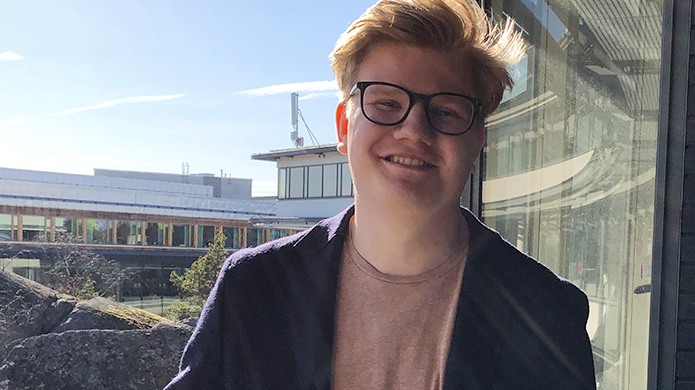 Each year, the Vaartoe Centre for Sami Research at Umeå University awards scholarships to two students who have written essays on Sami themes. This year Johan Kihlert, who is studying a Master’s in the History of Ideas at Södertörn University, was one of the recipients. The idea of writing his Bachelor’s degree essay on Sami issues arose from a course on postcolonial theory.

“Thinking about what is close at hand is a fairly natural reflex, so I thought about the Sami people. When you start digging a little, some very uncomfortable things come to light. And it felt like a good match with my theoretical knowledge,” he says.

The essay is an analysis of the book Dat läh mijen situd by the Sami activist Karin Stenberg. The book is an anticolonial text that presents the writing of history between Sweden and the Sami people over a long time, and describes how Stenberg thinks that we should move forward with current problems.

“I had read a lot about postcolonial theory that focused on the historical situation for African Americans, and I concluded that there were many similarities. So this essay, in the end, is some kind of contribution to a global narrative about colonisation and how it has also happened within Sweden’s borders.”

The citation for this prize says that Johan Kihlert has, “though his essay, contributed to increasing the understanding of how Sami actors and texts have interacted with colonial power structures” and that he “succeeded in balancing intellectual creativity with solid research methodology and, in a commendable manner, fulfilled the objectives of his degree.”

Johan Kihlert travelled to Umeå in early March to attend the prize-giving ceremony.

“Once I had written the essay I was a bit unsure, and saw things that could have been better, so it was wonderful to get confirmation that it was good. It was very cool that the essay was so appreciated,” he says.

Now that he is starting to think about the subject of his Master’s dissertation, Johan Kihlert is considering a Sami theme.

“I have become aware of Sami issues and it feels as if there’s a lot to continue with. I have now gained very specific knowledge, but I don’t know so much about what’s happening today. It would be good to do something a bit more contemporary and to link it all together. This is a pressing issue for all Swedes – it’s not just about something up there in the north, it is part of an economic machinery that we have profited from.”