Thanks to funding from the Council of the Baltic Sea States (CBSS) and the Swedish Institute, Urban Larssen, researcher and journalism teacher, has exported an educational pilot project. In practice, it involves panel discussions that focus on issues relating to the media coverage of human trafficking and is a collaborative project that unites many good things in one package. 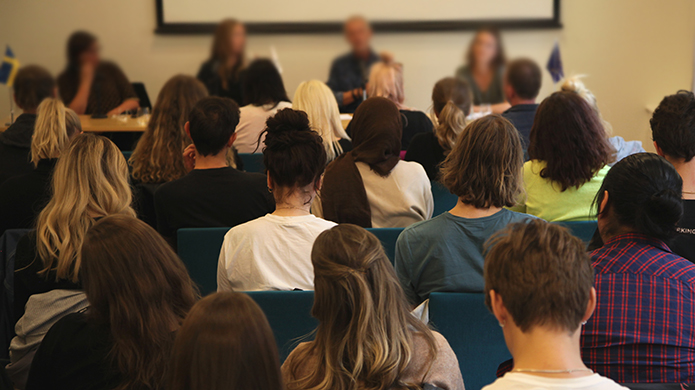 “The common purpose of all the collaborative partners is, ultimately, to improve coverage of these types of important societal issues. Journalism programmes at the participating universities are also testing whether this is a meaningful way for the students to increase their awareness of research theory,” says Urban Larssen.

It all began when he was trying to develop new ways of getting students on his Bachelor-level course in Journalism to see research theory as something more than something in a textbook. He wanted to find educational ways of linking theory and practice. The result was a panel discussion conducted in partnership with the Council of the Baltic Sea States, an intergovernmental council for cooperation in the states around the Baltic Sea, as well as Iceland and Norway.

The subject of the panel discussion was the media coverage of human trafficking, coverage that has been criticised for inadequately describing the complexity of the issue. The participants were a reporter from Sveriges Radio, a lawyer, a representative from the police and Ninna Mörner from Södertörn University. She is currently the editor of Baltic Worlds, but previously worked with victims of human trafficking.

The students were invited to the panel discussion and had two tasks:

“I thought it was an interesting and different element of the study programme. I found it easier to understand the theory when we applied it to an actual case. The panel discussion was also a surprise, as I know that there is human trafficking in Sweden, but not that it’s on such a big scale. That isn’t always obvious from the media coverage,” says Denise Sandström, a former student who now works for Expressen TV.

Journalism is often regarded as a practical education, but the university has the task of integrating academic perspectives.

“On this course, the students mainly act as researchers, not journalists, while carrying out their thesis work - but it can be difficult to get them to drop the journalistic side. This project includes the academic perspective, as there has to be preparatory element for doctoral studies or working in non-governmental organisations. Not everyone moves on to editorial work,” says Urban Larssen.

Denise Sandström agrees. When she started studying, she did not always see the benefits of theoretical knowledge but, since starting work, she has realised the importance of the academic elements of her education.

“I can see how I have skills that some colleagues who have a practical education don’t always have. At the same time, they are better at other things. For example, we have learned to think critically, to sort information, solve problems. These are incredibly important aspects of journalism. We complement each other,” she says.

This model will now be tested on other journalism programmes. From a collaborative perspective, there are two levels of cooperation. One is the involvement of the Baltic States’ network of government agencies, the other is the teachers at the education providers. Each teacher then works with their country’s government agencies to organise a panel discussion to which the students are invited.