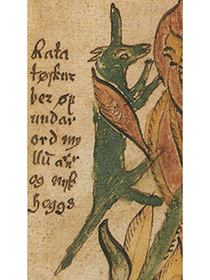 The Ratatǫskr Research Group for Literary Animal Studies was founded in 2018 by people working in Comparative Literature at Södertörn University who have an interest in this field:

The purpose of establishing the group is to read and discuss each other’s texts, plan conference travel, apply for research funding, develop courses and benefit from each other’s networks. We also want to develop cooperation with people who are active in this field in Comparative Literature and in other subjects, both inside and outside Södertörn University. In the long run, our aim is to find a place for the group in the international arena for literary animal studies. If you wish to be included in our e-mail list to get information about our events and activities or if you want to contact us for some other reason you are welcome to e-mail us on ratatosk@sh.se

The study of the relationship between animals and humans is an interdisciplinary field that is currently thriving, and which is represented in several subjects at Södertörn. Apart from a strong research connection, in Comparative Literature we also offer a supplementary level course and a Master’s course on literary animal studies. We are particularly interested in questions such as: How is the animal–human relationship depicted in literature? How can various literary forms (such as zoopoetics) and different types of reading contribute to challenge anthropocentric paradigms in comparative literature? How can we understand the relationship between matter, metaphor and agency in literary depictions of non-human animals? What is the relationship between the hierarchically organised animal/human dichotomy and ideas about categories such as sex, sexuality, ‘race’ and disability? What ontologies regarding the human-animal relationship are possible to imagine? And how are these questions linked to ethical issues and dilemmas in the wider humanistic field and in ongoing social interactions between species?

Ratatǫskr is from Nordic mythology, and is a squirrel that runs up and down the tree of life, Yggdrasil, carrying messages between the dragon in its roots and the eagle in its crown. It is thus both a representation of a ‘real’ animal species and a carrier of meaning in human mythology. This, as well as its agency and conveyance of knowledge about the world itself, makes Ratatǫskr an illustrative symbol of the research group’s interests.

On December 5-6, 2019, there was a northern-European symposium with invited speakers from Denmark, Iceland, Finland, Norway and Sápmi and Sweden. The symposium attracted around 50 persons and resulted in the formation of the Ratatǫskr Network for Literary and Cultural Animal Studies. In Sweden, this network is represented by Ratatǫskr Research Group for Literary Animal Studies, and in the other countries that are part of the network of the following persons: