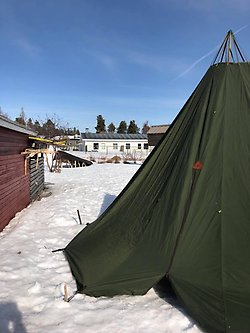 The overarching purpose of this project is to explore how, when and where young Sámi children philosophize through storytelling. The point of departure for the project is research in early child- hood education (ECE) which identifies that children’s philosophizing enfolds in narration (Kennedy, 1996; Johansson, 2019a) and that indigenous philosophies – that is, indigenous ways of knowing and articulating the world – are often expressed through oral narration (Kuokkanen, 2007; 2008; Oskal, 2011; Turner, 2006).

In Sámi contexts, storytelling is connected to particular places and with particular activities (Nergård, 2006). The different stories and philosophical ideas that Sámi children represent and explore are inseparable from the world and the places where they are articulated. Thus, the specific aim of this project is to investigate how young children in Sámi contexts use places to philosophize and articulate their world through storytelling. Such an aim entails that the children’s philosophizing is presented in contexts other than where they themselves express it, for example through research publications and other material.

Thus, by investigating and presenting the Sámi children’s stories as philosophizing, this project also in- vestigates how an attention to children’s philosophizing can become a part of what Turner has called a “critical indigenous philosophy”, a philosophizing where various indigenous ways of think- ing and articulating the world challenge colonial practices and assumptions, power structures, and philosophies (Turner, 2006; Oskal, 2011).

Accordingly, a sub aim is to investigate if and in what ways young Sámi children’s philosophical storytelling can challenge colonial assumptions in pedagogy, philosophy and society and if and how attention to their voices can be understood as a decolonizing practice. This could for example involve challenging the role of a national curriculum, what it means to be educated, in relation to ways of life that are not limited by the borders of the Scandinavian nation states.

These two aims are particularly relevant in the context of ECE and the pre-school as arenas where young Sámi children can encounter a colonial educational heritage and a dual traditional and contemporary Sámi culture, while at the same time discovering and articulating their world. Exploring the philosophical storytelling of early childhood in this project will therefore involve studying the fundamental aspects of life (Johansson, 2018).

External link, opens in new window., Professor at UiT – The Arctic university of Norway, Department of Language and Culture

External link, opens in new window., Associate Professor at the Te Whiringa School of Educational Leadership and Policy in the Faculty of Education, University of Waikato, New Zealand