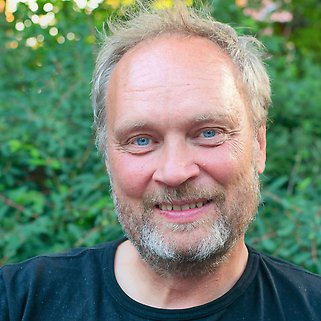 I am a professor in evolutionary biology teaching and doing research within the subjects of ecology, genetics and spatial planning for sustainable development.

My research deals with biological diversity at the genetic level and how it is affected by environmental change, diseases and geography. We study this in fishes (stickleback and trout), birds and blue mussels in in the Baltic Sea.

My research is aimed at understanding how is genetic variation is preserved in wild populations despite strong natural and sexual selection, and factors such as bottlenecks and random genetic drift. To answer this I have focused on the variation in highly variable protein coding genes important for disease resistance and the maintenance of genetic variation in protein coding genes compared to non-coding neutral genes, such as microsatellites in fish and birds. The major histocompatibility complex (MHC ) has a central function in the vertebrate immune system. Some MHC loci show an exceptionally high genetic variation.

Funding from Baltic Sea Foundation (Östersjöstiftelsen) for a new research project on Health hazard in the Baltic Sea: the presence and the effect of fluorinated substances on Baltic Sea organisms.

Per- and polyfluoroalkyl substances (PFAS) is a collective name for approximatively 4700 synthetic chemicals used in a myriad of products, such as nonstick frying pans, waterproof clothing, cosmetics, electronics and firefighting foam. They are sometimes called “forever chemicals” as they break down very slowly, if at all, in the environment. They are found in indoor and outdoor environments, wildlife and in virtually every human tested. PFAS chemicals have been associated with cancer, developmental toxicity, and other negative health effects.

PFAS in the Baltic Sea

The widespread household use of products containing PFAS make sewage treatment plants (STPs) draining into in the Baltic Sea plausible point sources. Very little is known about the amounts and composition of PFAS coming from STPs as well as the effects of them on the organisms in the Baltic Sea. We believe that the PFAS currently monitored (commonly around 20 of almost 5000 substances) only comprise a small fraction of the total PFASs released. The disparity between the PFAS monitored and the PFAS used, suggests that the exposure to PFASs in the environment is largely underestimated. The aim of this three-year project is to measure the concentrations and composition of PFAS, in water, sediment and organisms in Baltic Sea food webs near STPs by combining methods of determining the different fractions of fluorine; known and unknown PFASs (i.e. fluorine mass balance, FMB). In addition, effects of developmental exposure from emerging and unstudied PFAS will be evaluated in experiments in two Baltic Sea organisms, Mytilus, Macoma and small benthic Crustaceans.

The novelty of the project lies in conducting FMB to address the problem that targeted analysis covers only a small fraction of the total 4700 compounds that are in commerce and that we will collect samples along 4 different transects that allows for replication and capturing inevitable spatial natural variability. We will use a wide suite of ecotoxicological endpoints for investigating health and occurrence of PFASs in wild-caught mussels and Crustaceans, and investigate sensitive endpoints (e.g., behavioral) in lab experiments.

I teach undergraduate courses on evolution and population genetics, and statistics, and I supervise exam projects.

Health hazard in the Baltic Sea: the presence and the effect of fluorinated substances on Baltic Sea organisms