Three researchers from Loja, southern Ecuador, have been on a three-week visit to Sweden. Their trip was part of on an ongoing cooperation between Universidad Técnica Particular de Loja and Södertörn University. 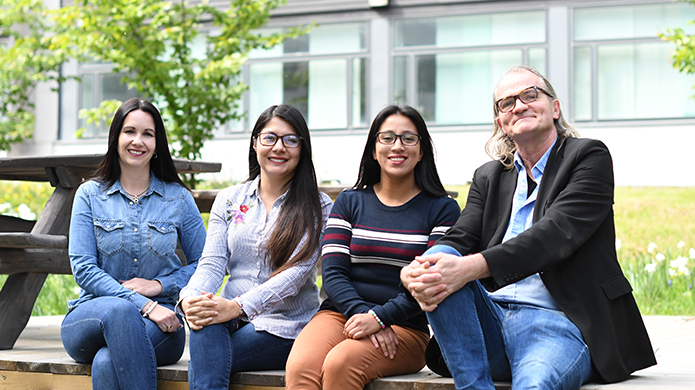 The mining company Exploken Minera has its offices in an ordinary building in the village of Congüime. For a few years now, the local gold mine has been run by the village’s inhabitants, Shuar people who have lived in the southern Amazon for generations.

“Typically, when we talk about exploiting natural resources we mean transnational companies that lay waste to an area and have negative environmental and socio-ecological consequences for the impacted population. But that’s not what’s happening here,” says Maleny Reyes, environmental engineer from the Observatory of Socio-environmental Conflicts at the Universidad Técnica Particular de Loja, Ecuador.

Along with María Beatríz Eguguren Riofrío and Gabriela Espinoza, Maleny Reyes has spent over three weeks at Södertörn University as part of the project Realities of gold: Socio-environmental (in)justice, Indigenous resistance and rights-based alternatives in the Ecuadorian Amazon. The project is a cooperation between the observatory in Loja and Södertörn University. Rickard Lalander – professor of environmental science – is one of the Swedish participants. The purpose of the visit is to strengthen cooperation between the two universities, exchange experiences and boost research expertise. The entire project is funded by the Swedish Foundation for International Cooperation in Higher Education and Research.

The Shuar people’s mining company in Congüime is one of three parts of a larger project in which researchers are studying what they call socio-environmental conflicts. The study covers three mining projects: a Chinese one, the Mirador project; one run by the Canadian company Lundin Gold; and the one run by the Shuar people.

“Congüime is unique in Ecuador and in Latin America. But this is not just any old gold mine, it is both environmentally and socio-culturally responsible. They do not use heavy metals such as lead and mercury. The idea is that it will function as a prototype, as another way of extracting natural resources,” says Maleny Reyes.

Tensions do arise, despite the local community sharing ownership of mining rights. Before the mining company can take any major financial decisions, they must have them approved by the local community's spokesperson. This person has the power to decide whether the profits from the mine will be reinvested in the community, distributed as cash to the village’s families or reinvested in the business. At the same time, this spokesperson must have the support of other inhabitants, this is not always problem-free and works differently in theory and practice.

Rickard Lalander has been involved in research projects linked to countries in Latin America for several years. He has long worked on socio-environmental conflicts and is an environmental scholar specialising in global development.