She has lain, practically untouched, at the bottom of the sea for more than 500 years – Gribshunden. A unique wreck that allows us a glimpse through the door of history. 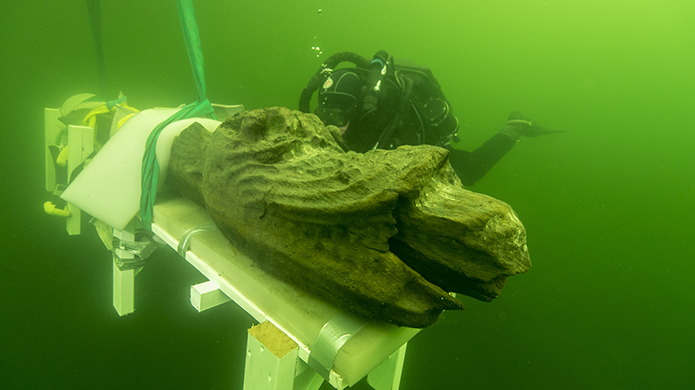 Close to Stor Ekön in Ronneby archipelago, a unique shipwreck rests at the bottom of the Baltic Sea. Around 35 metres long and 12 metres wide, Gribshunden lies there in the dark, where she has rested ever since a fateful summer's day in 1495, when fire broke out onboard and she sank. This tragic event has now given researchers insight into the shipbuilding techniques of the time.

“Gribshunden is a piece of global history, as this was the kind of ship that explored the world, but has not been preserved anywhere other than the Baltic. Even in her time, she was one of a kind, the first generation of the ships that came to dominate that era's European travel and warfare,” says Johan Rönnby, professor of marine archaeology at Södertörn University. 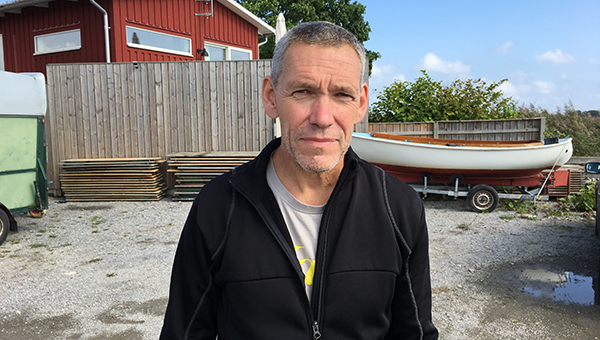 Gribshunden is mentioned in numerous historical sources, such as the “Sture Chronicles”. However, it was first in the 1970s that she was found by recreational divers, and it would take another 20 years for the ship to be identified. More time then passed until researchers understood how well preserved she is. Johan Rönnby and his colleagues made the first dives in 2013. Now, six years later, more extensive excavations are underway, and a large shaft has been dug.

There have been many spectacular finds: coins, tin plates and, not least, the “best treasure chest” of King Hans (then king of Denmark). Chronicles of the time describe how the king lost some of his most valuable clothes and possessions when the ship sank. Among these were chainmail and a beautiful lathed tankard; to this list we can now add handheld firearms, animal bones and barrels for beer and fish.

However, these are not the finds that Johan Rönnby mentions when he is asked about what they discovered during their studies: “We also found logs. They’re perhaps not the most exciting finds, but I think they are pretty cool. They were chopped up in 1495, to be burned in a stove or in the ship’s kitchen – but that never happened and they are still lying there. It gives a sense of time. They are still pale, you can see the axe marks where they were cut from large pieces of birch,” he says. 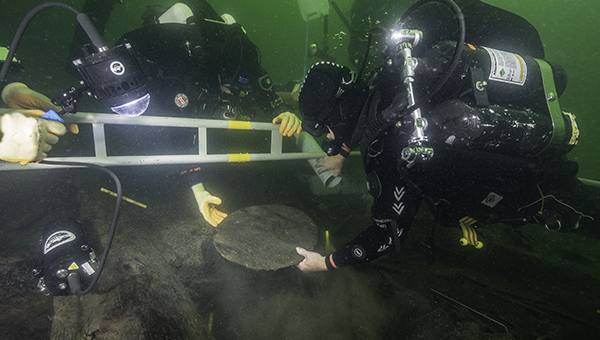 Gribshunden is regarded as the best-preserved shipwreck from this era, and the only one of its kind. Researchers can thank the brackish water of the Baltic for this, as this has given Johan Rönnby and his colleagues a unique opportunity to study how 15th and 16th-century ships were constructed - particularly as she belongs to the type of ship that sailed across the Atlantic, such as Christofer Columbus’ ship, Santa Maria. She is carvel-built, which means that the boards that form the ship’s hull are placed edge to edge, rather than overlapping.

“We can now see what early-modern ships looked like and study this in detail. It provides us with knowledge of building technologies. But, if we broaden our perspectives, these are the vessels that were involved in bringing about the New World. Without these ships, there would have been no sailing across the Atlantic, colonialisation could not have started, no new goods would have reached Europe. The ships were part of what happened, which still has an impact now,” he says.

The discovery of the shipwreck has reached far outside the specialised world of marine archaeology. There has been overwhelming interest, particularly from the residents of Ronneby. A few years ago, when the research group arrived in the harbour after having salvaged a figurehead, they were welcomed to the quayside by hundreds of curious people.

“They were interested in research and discovery, and that is perhaps the most important thing - that people become involved; the joy, enthusiasm and curiosity we saw. This is also what research is about, that you are interested in discovery, in the unknown. I’m really starting to realise that this is what researchers should highlight, that this is what gives us a boost, wanting to know more,” he says.